You are here: Home1 / concerts 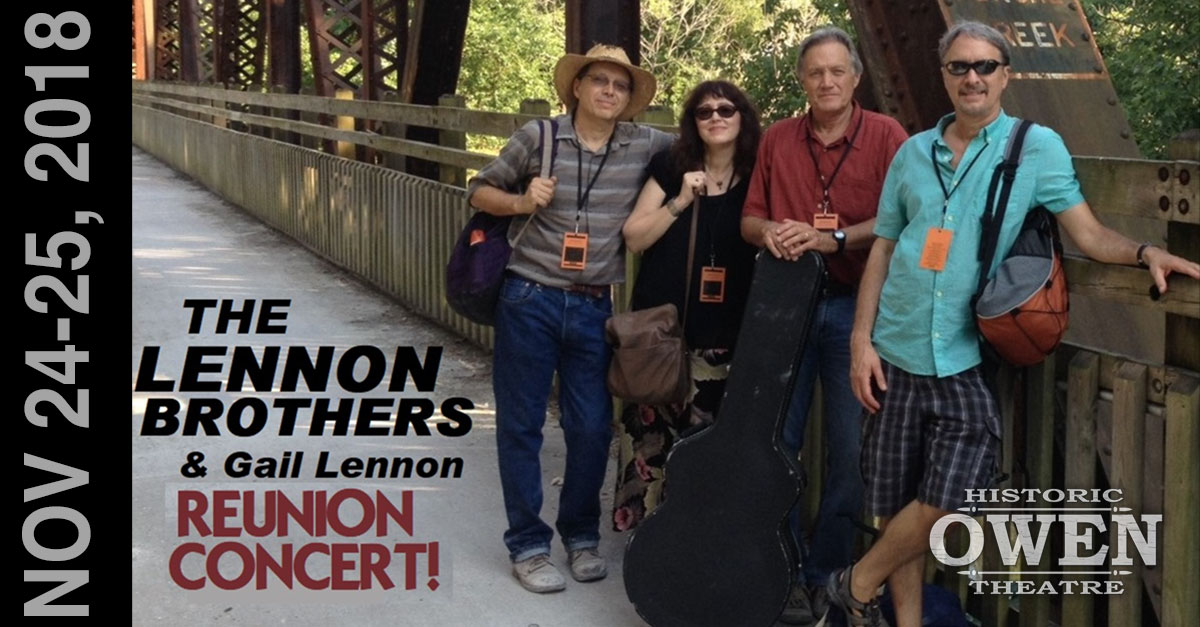 After many years, The Lennon Brothers & Gail Lennon are excited to announce a reunion concert in Branson, Missouri for TWO SHOWS ONLY!

Enjoy authentic swing harmony, inside of Branson’s oldest and most historic entertainment venue!

This concert will not only be fun for Lennon fans of all ages, it will also be of benefit to the Branson Regional Arts Council and their new visual and performing arts programming being developed at the Historic Owen Theatre.

If you love the vocal swing harmony that was America’s favorite music in the 30’s and 40’s…you need look no further than The Lennon Brothers and Gail Lennon. 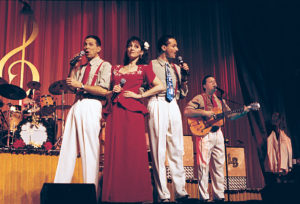 The Lennons capture the sound of legendary performers such as The Modernaires, The Pied Pipers, The Delta Rhythm Boys and The Four Vagabonds. They sing the works of some of the greatest American composers… Hoagy Carmichael, Johnny Mercer, Duke Ellington, Irving Berlin and more.

Brothers Dan, Bill, and Joe grew up in Los Angeles as members of a celebrated musical heritage. Their father, Bill, was the lead singer in the original Lennon Brothers, who performed in the 1940’s and 50’s. It was their sisters, however, who sang their way into America’s hearts as young performers on The Lawrence Welk Show. The Lennon Sisters’ “girl next door” beauty and charm endeared them to millions, but it was their harmonies that led them to be inducted into The Vocal Group Hall-of-Fame in 2002.

The boys have been singing from the time they were born. And as the times were a’ changing so was the music. They sang The Beatles, Crosby Stills and Nash, Jefferson Airplane…but also the music of an earlier time: Al Jolson, The Mills Brothers, and the original Lennon Brothers. 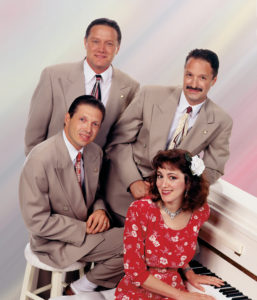 In 1983, Bill met his wife-to-be Gail. Gail was among the top studio singers in L.A. at that time. They discovered a mutual love for the music of the Swing Era and, with brother Dan, put together a vocal group called The Fatells. This was the fore runner of The Lennon Brothers of today.

In 1994, thirty members of the Lennon family moved to Branson, Missouri to perform at the new Welk Resort. The brothers and Gail opened the resort with a morning show that The Chicago Tribune hailed as “The BEST show in Branson!” The show featured not only a hot live band and tight swing harmonies, but also the brothers’ “…Monty Python meets Vaudeville” style of comedy.

Gail was voted “Female Vocalist of the Year” in 1994 at the Branson Entertainment Awards. Over the next several years, the group won awards so often they were given a spot in the Branson’s “Hall of Fame”.

And so did their fellow performers:

The Lennon Brothers & Gail Lennon have released 3 CD’s: “Swing Away!”, “Swing Sandwich”, and “The 9:30 Special”. In The Groove magazine praises the recordings “…outstanding quality” and called the groups performances “…amazing!”

Since last headlining in Branson, the group has traveled for special events. They’ve been the headline performers at the “Indian Wells Jazz Festival”, have performed on the S.S. Rotterdam and have played venues throughout the Midwest and West Coast.

The Lennon Brothers & Gail Lennon Reunion Concert will be an exciting event for area locals and Branson vacationers alike.  Early purchase of tickets is highly recommended as both performances are expected to completely sell out. Visit BransonArts.org/lennon. 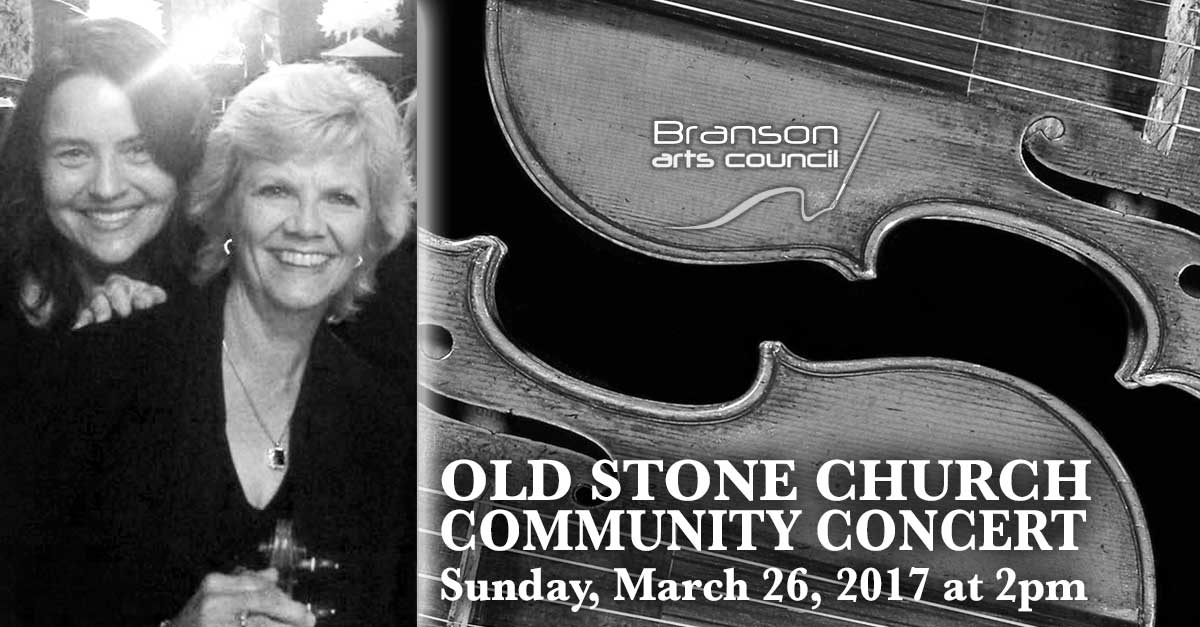 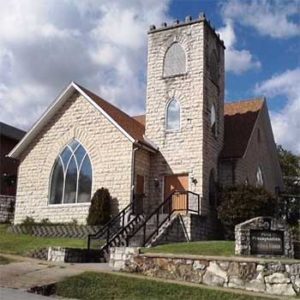 The Branson Arts Council is excited to launch it’s 2017 Community Concert Series to be held at the Old Stone Church in Branson. Co-organized by Americanna Magness, this year’s slate of free concerts promises to include a nice variety of incredible musical performances.

Featured performances will include:

A graduate of Indiana University, Pamela Davis is Assistant Concertmaster of the Springfield Symphony, and Concertmaster of the Springfield Regional Opera and Taneycomo Festival Orchestras. After years of teaching public school music and private violin lessons, Pam recently retired from nine years as an administrator, having earned her Masters and Specialist degrees from MSU. Before moving to Missouri, she performed in the Florida Symphony, the Orquesta Sinfonica del Estado de Mexico, the Midland Symphony, the Traverse Symphony, the Las Vegas Symphony, the Nevada Chamber Orchestra, and the Serenata Trio. Pam spent 14 years playing and touring with various entertainers in Las Vegas, such as Frank Sinatra, Johnny Mathis, and Henry Mancini, but her favorite musical moments are with Kirsten.

Kirsten Weingartner-Weiss holds music degrees from Illinois Wesleyan and DePaul Universities. She had performed as a member of  several orchestras throughout the Midwest, prior to landing in Branson,  where she made many of her fondest memories and friends in the 11 years she spent with the Lawrence Welk Orchestra.  Currently, Kirsten serves as a the principal violist for the Springfield Symphony Orchestra and the concertmaster for the Springfield Drury Civic Orchestra and is an active chamber musician.

Most recently, she has been busy taking Suzuki teacher training and has started her own private studio, where she teaches approximately 30 violinists and violists from ages 2-62.  Aside from her musical endeavors, Kirsten most enjoys spending time with her beautiful family,  running (slowly),  and making music and mischief with her dear friend, Pam.

Support Arts In The Branson Tri-Lakes Area All Season Long!

Click here to become a valued member of the Branson Arts Council.  It’s easy, and extremely affordable for individuals, students, families, and even businesses who appreciate the importance of the arts in our community and understand the positive impact they have on our future generations.