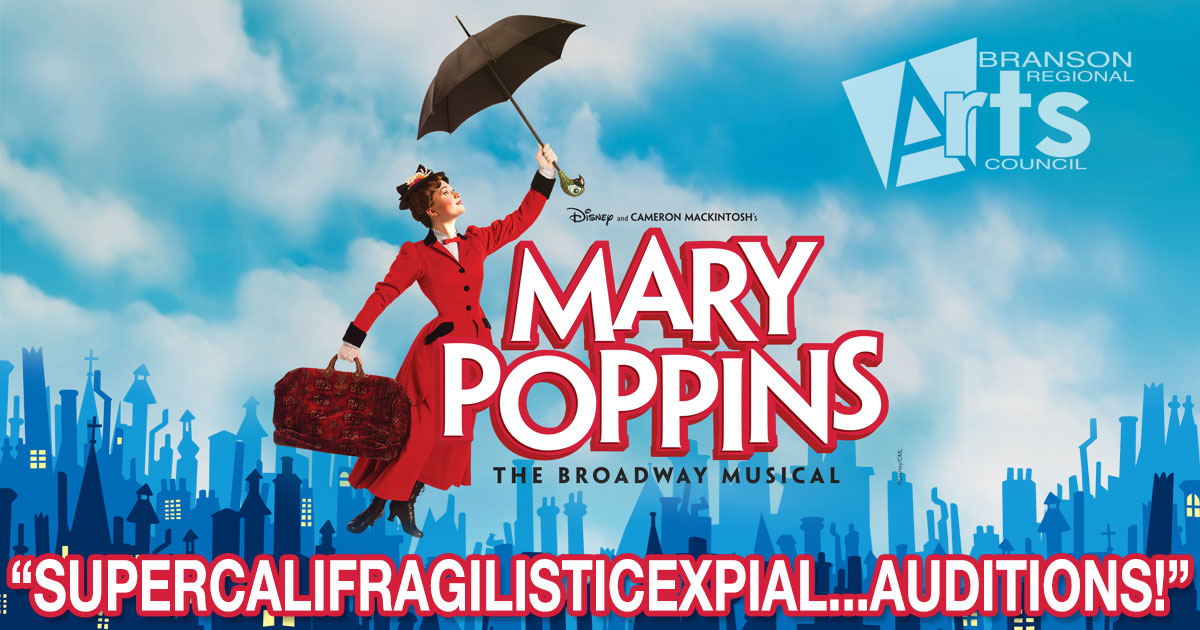 The Branson Regional Arts Council welcomes performers of ALL AGES to attend open auditions for the February 2023 musical production of Mary Poppins – The Broadway Musical, directed by Jacob Deck.

No need to register for auditions, simply show up at one of the scheduled times above.

What to Prepare:
Looking for performers of all ages! Those auditioning are asked to prepare a 60 second cut of a musical theatre song in the style of the show that showcases their range and acting skills. You may also sing from the show. Please bring an mp3 track or youtube karaoke track cued up on your smart device. NO A CAPPELLA auditions.

There will be a dance audition as well. Please come dressed accordingly – wear appropriate clothing and footwear you’re comfortable moving in – a character or jazz or character shoe preferred.

Dance level: Strong dancers versed in musical theatre dance, jazz, ballet, and tap. (There are multiple roles that do not require dancing).

Bert: The narrator of the story, is a good friend to Mary Poppins. An everyman, Bert has many occupations, including hurdy-gurdy player, sidewalk artist and chimney sweep. Bert watches over the children as well as the goings on in Cherry Tree Lane. He has charm, speaks with a Cockney accent and is a song-and-dance man. Gender: Male. Stage age: 30 to 35. Vocal range top: F#4/Vocal range bottom: B2.

George Banks: The father to Jane and Michael Banks, is a banker to the very fiber of his being. Demanding “precision and order” in his household, he is a pipe-and-slippers man who doesn’t have much to do with his children and believes that he had the perfect upbringing by his nanny, the cruel Miss Andrew. His emotional armor, however, conceals a sensitive soul. A baritone, George may speak-sing as necessary. Gender: Male. Age: 40 to 45. Vocal range top: Eb4/Vocal range bottom: Bb2.

Winifred Banks:George’s wife and Jane and Michael’s mother. A former actress, she is loving and distracted homemaker who is busy trying to live up to her husband’s desire to only associate with “the best people” as well as be the model wife and mother. She suffers from the conflicting feelings that she’s not up to the job of “being Mrs. Banks,” yet, she is, and more. She has great warmth and simplicity to her tone. Gender: Female. Stage age: 30 to 35. Vocal range top: D5/Vocal range bottom: A3

Jane: The high-spirited daughter of Mr. and Mr. Banks, is bright and precocious but can be willful and inclined to snobbishness. Gender: Female. Stage age: 11 to 12. Vocal range top: F#5/Vocal range bottom: A3.

Michael: The cute and cheeky son of Mr. and Mrs. Banks. Excitable and naughty, he adores his father and tries to be like him. Both he and Jane misbehave in order to get the attention of their parents. Gender: Male. Stage age: 9 to 10. Vocal range top: E5/Vocal range bottom: A3.

Katie Nanna: Jane and Michael’s nanny at the beginning of the show. Overwhelmed and upset, she has absolutely had her fill of the Banks children. Gender: Female. Stage age: 30 to 30.

Policeman: A neighborhood fixture who is respected by and observant of households on his beat. Gender: Male. Stage age: 30 to 40

Miss Lark: The haughty next-door neighbor of the Banks family who treats her dog, Willoughby, as if her were child. Gender: Female Stage age: 30 to 35

Admiral Boom: A retired Royal Navy man and neighbor of the Banks family. A physically large man with a loud and booming voice, he speaks in Navy jargon and has a soft spot for his neighbor, Miss Lark. Can be any vocal range as needed. If Admiral Bloom doubles as the Banks Chairman, he can be a baritone. Gender: Male Stage age: 50 to 50.

Mrs. Brill: The housekeeper and cook for the Banks family. Overworked and harrassed, she’s always complaining that the house is understaffed. Her intimidating exterior is a cover for the warmth underneath. Mrs. Brill doesn’t have a high opinion of nannies in general and Mary Poppins in particular. She does not have to be a strong singer. Gender: Female. Stage age: 50 to 50. Vocal range top: D#5/Vocal range bottom: F#3.

Robertson Ay: The houseboy to the Banks family. Lazy, sleepy and grumbling, he never gets things right and believes himself to be useless. He doesn’t do a lot of singing, but his “Spoonful” solo can be a fun surprise. Gender: Male. Stage age: 20 to 20. Vocal range top: G#4/Vocal range bottom: F3.

Mary Poppins: Jane and Michael Banks’s new nanny. She is extraordinary and strange, neat and tidy, delightfully vain yet particular, and sometimes a little frightening but always exciting. She is practically perfect in every way and always means what she says. A mezzo soprano with strong top notes, she should be able to move well. She can have a more traditional soprano sound, but precision and diction is the key. Gender: Female. Stage age: 20 to 20. Vocal range top: C6/Vocal range bottom: Gb3.

Park Keeper: Uniformed and officious, he makes sure no one breaks park regulations. His life is defined by rules, but he secretly hankers after his childhood. Gender: Male Stage age: 40 to 40.

Neleus: The statue of a young boy posed with a dolphin in the park. Neleus was separated from his father, Poseidon, and misses him very much. A small and lonely being, he is very happy to befriend Jane and Michael. This role is a wonderful opportunity to feature one of the strong dancers in your ensemble. Gender: Male. Stage age: 16 to 16.

Bank Chairman: The head of the bank where Mr. Banks is employed, is an Edwardian stuffed-shirt. He can speak/sing his lines if necessary. Gender: Male. Stage age: 50 to 60. Vocal range top: D4/Vocal range bottom: C3.

Von Hussler: A businessman seeking a loan from the bank for a shady business deal. He speaks with a German accent. Gender: Male. Stage age: 30 to 30.

John Northbrook: An honest business man seeking a loan to build a factory for his community. He speaks with an accent from Northern England. Gender: Male. Stage age: 30 to 30.

Mrs. Corry: Owns a magical gingerbread shop. She is a mysterious woman of great age who speaks with a Caribbean accent (or any accent that would make her seem exotic). Gender: Female. Stage age: 40 to 40.

Miss Andrew: George’s overbearing and scary nanny. With her bottle of nasty-tasting brimstone and treacle to keep naughty children in line, she is a bully who only knows one way of doing things – her way. A soprano with an alto belt, there can be some heaviness to her voice along with range. Gender: Female. Stage age: 40 to 40. Vocal range top: F5/Vocal range bottom: Gb3.