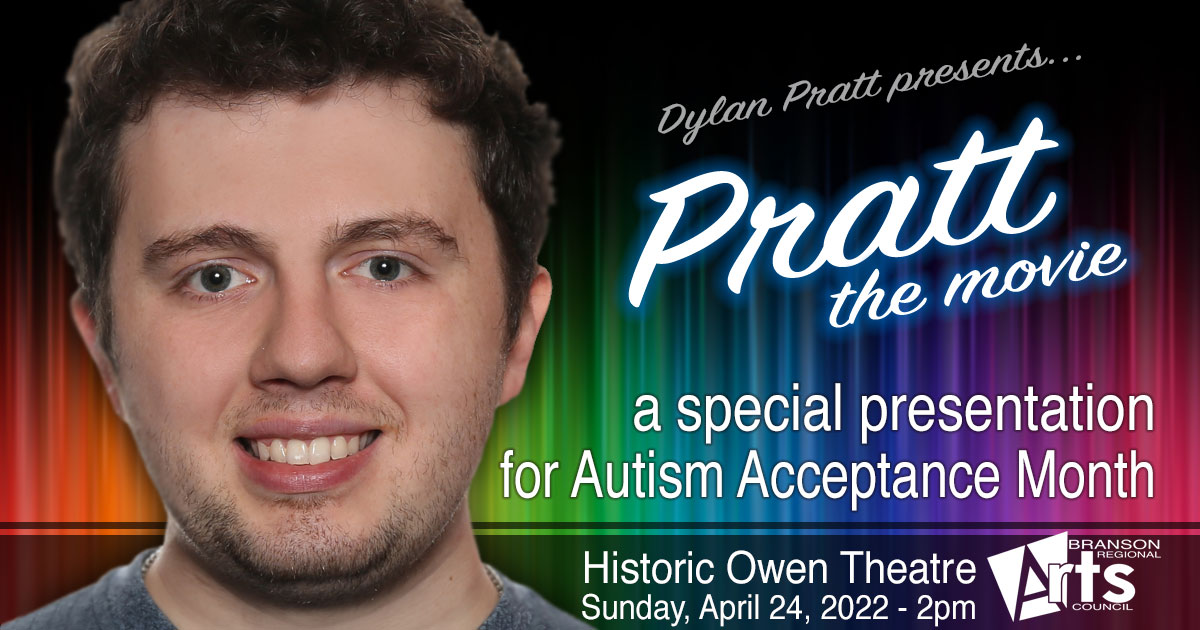 In honor of April’s Autism Acceptance Month, the Branson Regional Arts Council is proud to present a public showing of a very special digital film entitled, “Pratt The Movie.”

This free community event is on Sunday, April 24, 2022 at 2pm at the Historic Owen Theatre, 205 S. Commercial St. in downtown Branson.

The movie was written, produced and directed by an exceptionally talented young man, Dylan Pratt, a twenty-six year old resident of Branson.  Dylan is a long-time Arts Council volunteer and has performed in several BRAC musicals and events at the Historic Owen Theatre including Anything Goes, Miracle On 34th Street, Beauty & The Beast, Seven Brides For Seven Brothers, The Wizard Of Oz, The Odd Couple, and The Sound Of Music.  In the movie, he documents his journey from being diagnosed, at the age of two, with both Tourette’s Syndrome and high functioning Autism, to his recent desires to fulfill his dream of becoming a full-time actor.

Dylan didn’t realize he had a disability until the age of 15, when he was put in psychiatric care for the many struggles and difficulties he was having throughout his life. After receiving treatment for his condition, and through the support of a Christian school and group home, he was able to turn around his problems and is now well on his way to making his dreams come true.

In 2018, the Branson Regional Arts Council hosted a premiere public showing of Dylan’s film at the Historic Owen Theatre. At that time our Board of Directors had already begun the process of developing a “Special Abilities” educational program to provide opportunities in the arts for young people in our community such as Dylan. The pandemic of 2020-2021 put the brakes on our ability to implement this new program, but we are now at a point where we can once again move forward with those plans. As April is Autism Acceptance and Awareness Month, we are excited to once again feature Dylan through this showing of his newly edited and updated film.
– Jim Barber, BRAC Executive Director

Autism, or autism spectrum disorder (ASD), refers to a broad range of conditions characterized by challenges with social skills, repetitive behaviors, speech and nonverbal communication. According to the Centers for Disease Control, autism affects an estimated 1 in 44 children in the United States today.

There is not one autism but many subtypes, most influenced by a combination of genetic and environmental factors. Because autism is a spectrum disorder, each person with autism has a distinct set of strengths and challenges. The ways in which people with autism learn, think and problem-solve can range from highly skilled to severely challenged. Some people with ASD may require significant support in their daily lives, while others may need less support and, in some cases, live entirely independently.

“Today and every day, we honor autistic people and celebrate the meaningful and measureless ways they contribute to our Nation.  We applaud the millions of educators, advocates, family members, caregivers, and others who support them.  As we continue to build a better America, we reaffirm our promise to provide Americans with autism the support they need to live independently, fully participate in their communities, and lead fulfilling lives of dignity and respect.”

Dylan wants to share his true, life story with anyone who would be interested in attending, and he will be on hand to personally welcome the audience and answer questions.

As this is a free event, no tickets are necessary to attend. Any donations will support the BRAC “Special Abilities” program.