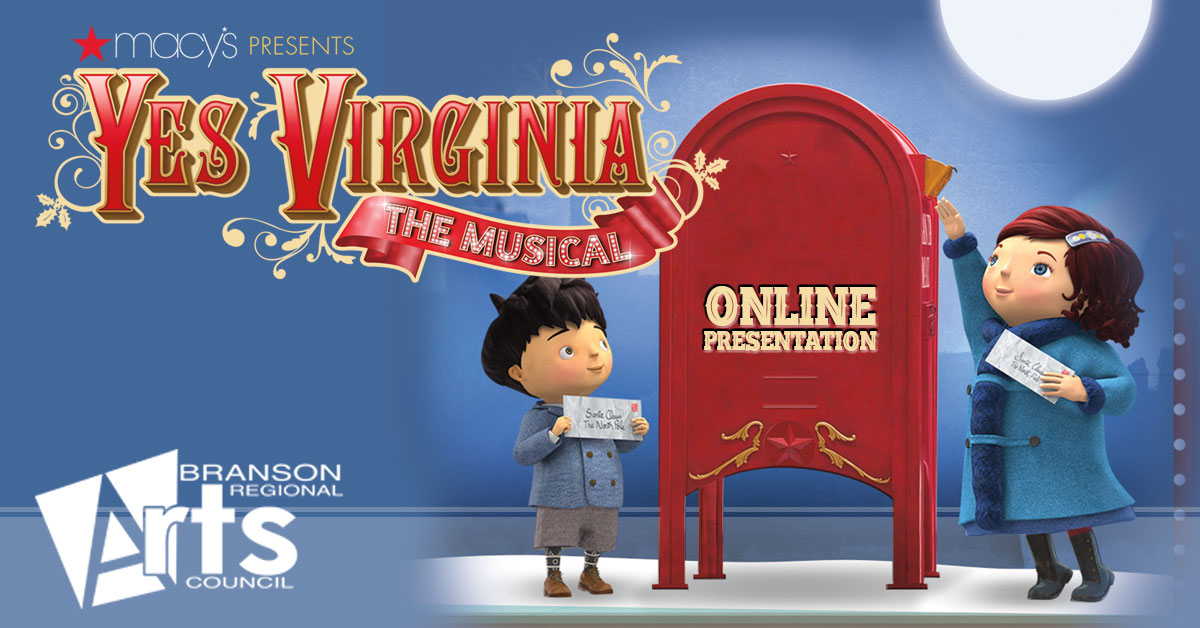 Yes Virginia The Musical is the heartwarming story of a little girl who taught the world to believe. Share this Holiday message of hope with your family!

On Dec 12, 2015, Tri-Lakes Community Theatre presented the musical at the Branson Star Theatre with a cast of 28 young performers. Now that the  TLC organization has merged into the Branson Regional Arts Council, it is being offered as a 2020 Holiday Season fundraising event in leu of a live stage production during this year’s pandemic at BransonArts.org/yesvirginia.

Music is by Wesley Whatley, with Book and Lyrics by William Schermerhorn. This stage production was adapted from the animated special and storybook by Chris Plehal by Macy’s Department Stores, who then, made it available to schools and community theatres across the nation, royalty-free.

Access to watch the streaming video is available for a $3.00 (or more) donation. The musical will be available for personal viewing through Dec. 31, 2020.

The musical tells the story behind the story of one of the world’s most famous letters to the editor. In 1897, an 8-year-old girl named Virginia O’Hanlon wrote to the editors of The New York Sun, asking whether Santa Claus was real. The unsigned editorial printed in the Sept. 21 edition of the Sun has become one of the most reprinted editorials in history. Using prose-filled, positive philosophy and bold belief, the editorial writer affirmed the existence of the jolly old elf and how he can be seen in the love and generosity that exists during the holidays.

TLC dedicated this production and the 2015 season to the loving memory of two of our beloved TLC family members… Clay Cantwell and Diane W. Barber.

Remembering Michael Jenkins – A True Veteran Of The Arts