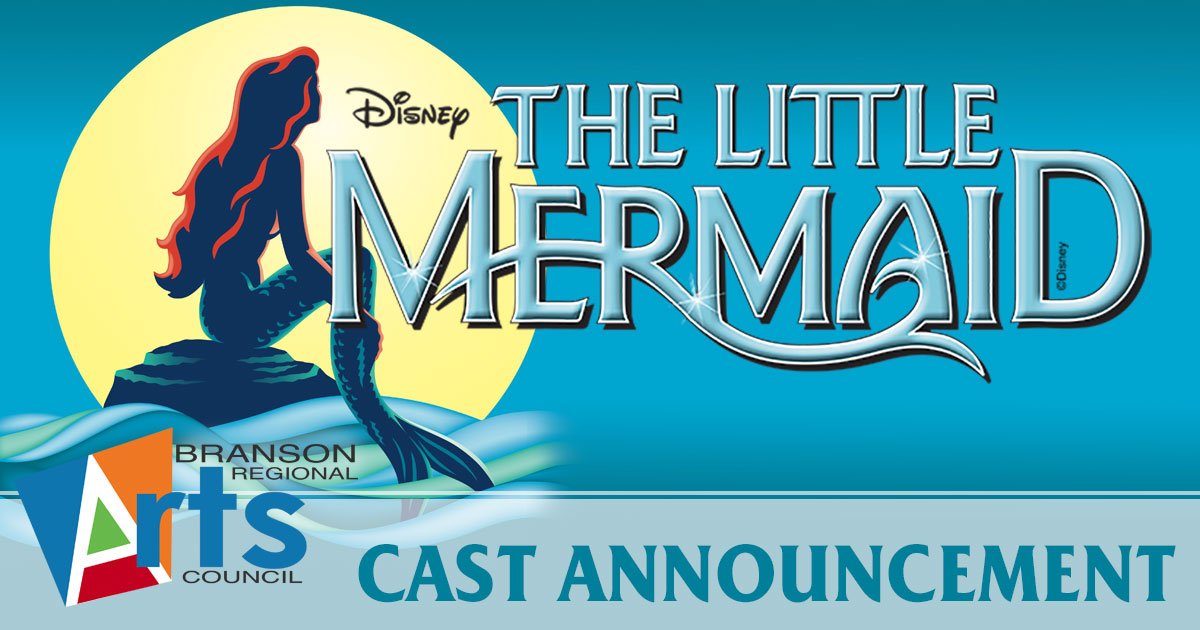 Congratulations to the cast members listed below who have been selected to appear in the upcoming Branson Regional Arts Council production of Disney’s The Little Mermaid at the Historic Owen Theatre, February 10 – 27, 2022.

Rehearsals will begin January 3, 2022. Full rehearsal schedule will be announced to all cast members soon.

Advance reserved tickets are now on-sale for all performances at BransonArts.org/tix or by calling the box office at 417-336-4255.

“We had an outstanding turnout for these auditions. There were many more actors auditioning for parts than there were available roles, so the producers and the Director had a difficult choice to make in casting this production. We thank everyone who participated in the auditions, and request that anyone not selected for this production, to please audition again for a future show.” – Jim Barber, BRAC Executive Director

The cast 0f Disney’s The Little Mermaid are:

About the musical…
Based on one of Hans Christian Andersen’s most beloved stories and the classic animated film, Disney’s The Little Mermaid is a hauntingly beautiful love story for the ages. With music by eight-time Academy Award winner, Alan Menken, lyrics by Howard Ashman and Glenn Slater and a compelling book by Doug Wright, this fishy fable will capture your heart with its irresistible songs, including “Under the Sea,” “Kiss the Girl” and “Part of Your World.”
Ariel, King Triton’s youngest daughter, wishes to pursue the human Prince Eric in the world above, bargaining with the evil sea witch, Ursula, to trade her tail for legs. But the bargain is not what it seems, and Ariel needs the help of her colorful friends, Flounder the fish, Scuttle the seagull and Sebastian the crab to restore order under the sea.
There will be seventeen (17) public performances of The Little Mermaid over a three-week period of time in February. This will be the first of eight (8) mainstage productions at the Historic Owen Theatre in downtown Branson in the 2022 season.
For Full Season Pass information visit bransonarts.org/event-tickets/theatre-season-passes.